It’s funny how just as I’m leaving Canada for greener pastures Toronto all of a sudden starts trying to make it up to me.  The weather has improved, I’m working for a phenomenal company (where was this three years ago?!), my friends are all super supportive and are making time for me before I leave (although that’s nothing new – thanks friends, love you lots), I finally have time to hit the gym, the sales around town are incredible (have you seen my recent amazing shoe purchases?), and I met a cute guy at the Korean consulate (of all places) and we spent the day roaming around the city getting things done.

Friday morning was a bit of a frenzy – I woke up late having slept in after a night I had promised myself and some colleagues the “HurriKate” would come out.  Turns out she prefers falling asleep around 11 after some Prosecco and chats with a gal pal.  I zipped over to get new passport photos taken as they had to be a particular size to fit the 2nd visa application.  I had to print out my new contract as well since I’ll be heading over a month earlier than anticipated (yay!) and since I don’t have a printer it was an extra stop at the copy centre before racing over to the consulate.  Once inside, there are no directions as to whether you have to take a number or just wait in line and hope for the best.  It seemed the HurriKate did arrive, late as usual, and was wondering what the hell she was supposed to do with all her paperwork (and a $60 processing fee – there have been so many fees throughout this process I think I could have paid off my student loan simply staying put).  The only other non-Korean person inside was R, who I rightly assumed was heading over to teach English as a second language as I am, and who guided me through my first experience at the South Korean consulate in Toronto.

After a few “where you stationed?”-style questions my number was called and I trotted up to the window to get started.  After being told my paperwork was all wrong it was back to the drawing board for me, and I was already excruciatingly late for my Motionball Gala meeting.  All was not right, but  I was there and I had to get’er done.  After grabbing all the new paperwork I came back and sat at the large table provided and went to grab a pen from my bag and found R was offering one to me.  I scribbled my name down on a sheet of paper passing it over to him with some mumblings about Facebook expecting never to hear from him again once I had completed the paperwork and handed the pen back over.  That was it.  I went to the counter, submitted my forms, and once I turned around he was gonezo.  The End.  Fin.  The story’s over.

…except it wasn’t.  I left the consulate practically running toward St. Clair station like an idiot and suddenly heard my (quickly draining) iPhone ping.  It was R offering me a ride home.  Little did he know that I was heading out practically to Scarborough and that I was not polite enough to decline this offer twice.  We headed out to York Mills and boonies, and I sat in a meeting with some incredible women for the next 45 minutes figuring out logistics for February 6th.  If you don’t have tickets then perhaps you should click here and get your act in gear.  After my meeting (and his snooze) we walked over to Thai One On for some nosh.  It’s alright food (I mean, the name has some humour) and we ate and I spilled curry all over myself like an idiot and life was pretty good.  After that it was off to Ikea – the place where all friendships and relationships are tested, of course.  R needed to buy a pillow and evidently Ikea sells them all rolled up so they’re easy to pack (and to fit in your carry-on for double duty as a neck rest on the plane). 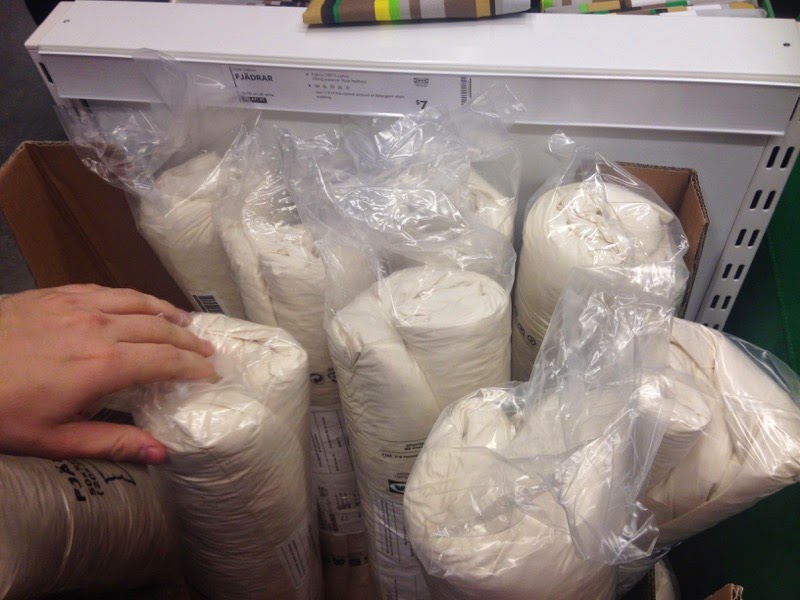 The trip pretty suddenly turned into us picking out how we would decorate and furnish our apartments once we got to South Korea.  I’ll be heading over to a suburb of Seoul, while R is going to Busan.  I’m sure our living spaces will be quite different as I anticipate mine will be very small (no sweat off my brow – my first apartment in Toronto was fewer than 250 square feet and didn’t even have a proper fridge).  I anticipate this is what my couch might look like: 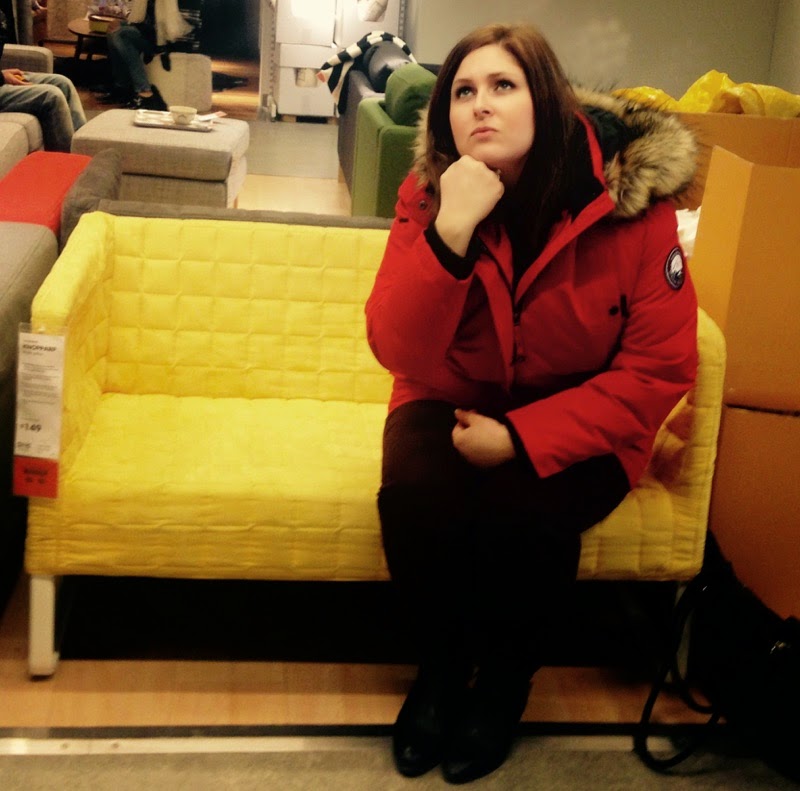 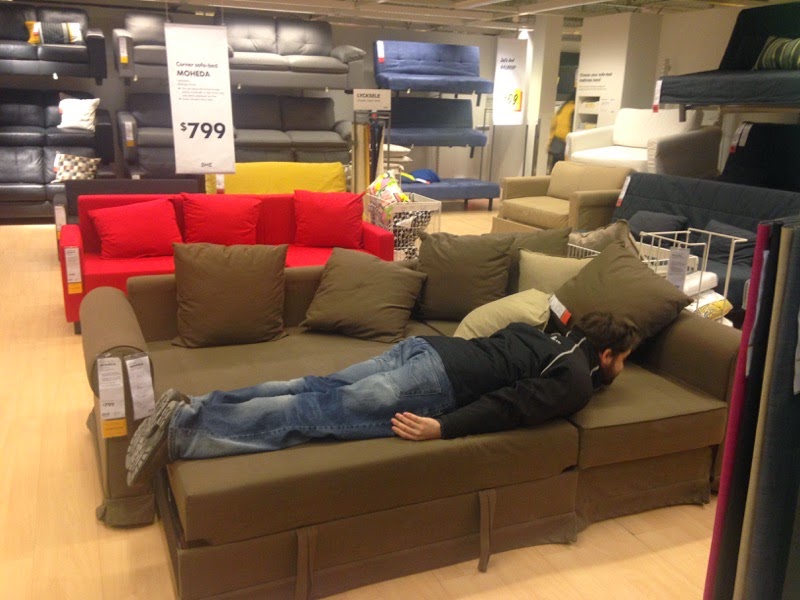 It’s unclear as to whether or not a catwalk will be provided. 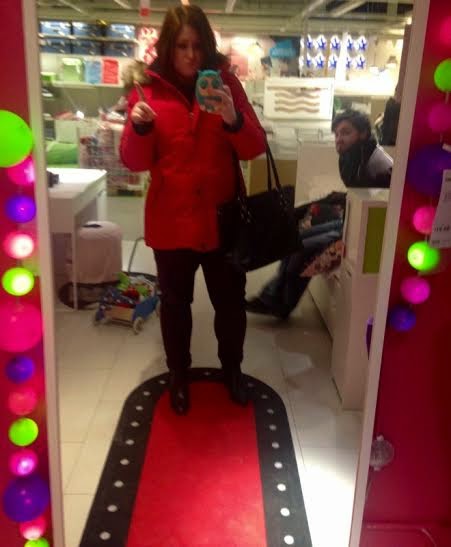 After Ikea it was my turn to choose the next location.  I’ve always wanted to try out Snakes and Lagers however I’ve never really had the time.  Friday I finally got to cross it off my bucket list!  The beer list was full of draughts I personally enjoy, so we were off to a great start.  R was far better at the trivia game I chose, but I managed to pull out some random aquatic knowledge that seemed randomly impressive after a couple of beers.  The menu prices at Snakes and Lagers were really reasonable and we decided to get the 50/50 Charcuterie Meat and Cheese platter.  Perfect for two, this appetizer had nice big chunks of cheese (1 per person, per type) and lots of meat and olives.  It was very tasty and I would definitely head back again to try some more of the shareable plates. 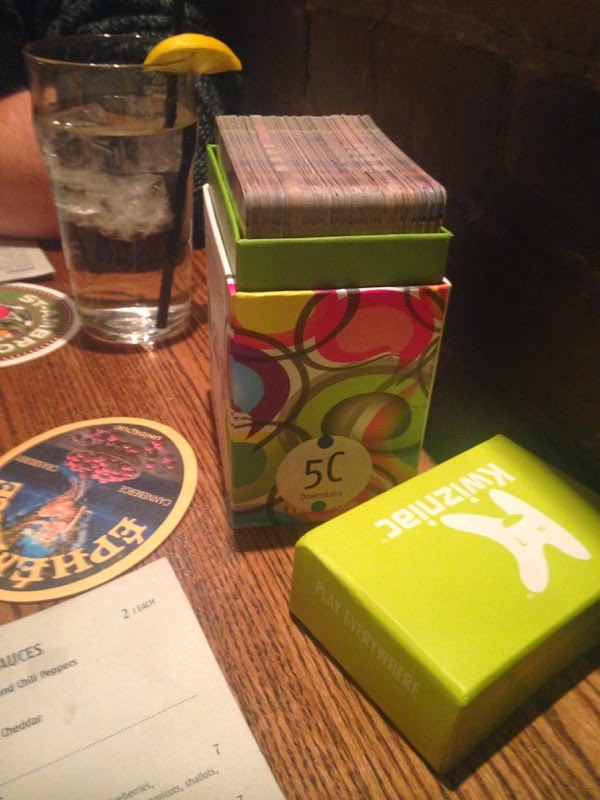 All in all it was a great day, the weather really cooperated (the sun was blinding – it was glorious), and I made a really smart and funny new friend who will be living in a beach town I’ll most certainly want to visit.  R – you’re welcome in Seoul (well, Gwacheon) anytime.  Safe Travels!  South Korea – see you in 10, 500 km and 37 days!