As a forward, I’d like to say that going to Thailand and visiting Elephant Nature Park Chiang Mai was something I was really excited to do!  Having read other blogs about the experience I guess I had a preconceived notion that I’d  be helping in the same way as one would volunteering to clean up a park or on a farm.  If you want to make a difference, you’ll have to be trained.  Training takes time!  You’re not going to be helping anyone by just going for the day, so if you want the full experience I would suggest going for a week.

Being that I was only there for a day, I figured I wouldn’t have that much interaction with the animals.  I didn’t feel comfortable getting too close to the animals as we weren’t directed as to how to approach them (we were told not to touch the trunks – that’s about it).  I’m sure they weren’t altogether thrilled with the number of people coming through, but by the time I went they were used to it.  The tours seem to have changed to include more activities since I went.  I didn’t think I’d be stuck in the covered area for much of the day sitting and waiting to do anything, so I’m glad they seem to have recognized that.  I understand that the main priority of allowing tourists is because the facility needs the tourist dollars to continue their important work.  I would have been more helpful and happy just donating to the organization and spending one of my few days in Chiang Mai with H in one of the many parks or temples. 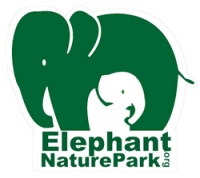 Back in March I finished my first teaching contract in Korea and got an extra month’s pay.  I had always dreamed of traveling to Thailand, and a couple of days after moving to Seoul I booked my Seoul – Bangkok round trip flight.  On my second day in Seoul I broke up with my boyfriend, came home, cracked a bottle of merlot, and got on Skyscanner.  My serene summer vacation became 5 flights in 10 days.  I went from Seoul to Bangkok to Phuket to Chiang Mai, back to Bangkok and then back to Seoul.  Is it any wonder I felt burnt-out?  The first activity I booked was Elephant Nature Park Chiang Mai.

I’ve had a few friends check out Elephant Nature Park Chiang Mai.  They all came out of it with full, happy hearts (and all the instagram-worthy shots over which an animal-lover could gush).  I had wanted to stay overnight at Elephant Nature Park Chiang Mai, but seeing as I had so many places to visit in such a short amount of time, I opted for the Single Day Visit.  This is actually longer than their “short park visit” which is just for half a day, I believe.  Both the short park visit and single day visit are THB 2,500 (about $95 CDN).  We departed at 7:40 AM and returned at 5:30 PM.  Feeding the elephants, elephant bathing, and lunch were included as well as pick up and drop-off from my hotel (ibis Styles Chiang Mai). Chiang Mai is in the north of Thailand.  In August it was quite hot as it is year-round.  We got a lovely breeze and there were plenty of opportunities to find shade.  Sadly, I found there were almost too many!  Ibis Style Chiang Mai was the last pick up and first drop off point for our tour.  We took a tour van to the park which was just over an hour away from the city (the site says 60 km).  On the way we were shown a video about the importance of ethical treatment of elephants (and other animals).  We were shown the ways that elephants are beaten into submission for zoos and circuses.  Want to ride an elephant?  Please DON’T!  Their backs can’t handle the pressure and stress of the human body (or the harness/ saddle).  The mahouts for these sorts of tourist attractions often maintain their dominance over the animal by using a sharp nail or hook.

Elephant Nature Park Chiang Mai serves as a sanctuary for elephants who have been mistreated by humans or who have been injured or abandoned.  The whole design of the park is to educate tourists and preserve the environment while offering homes for these beautiful creatures.

I was picked up in the morning in a van packed with other tourists.  We headed to the park where we dumped our things at a long table and waited for our guide.  Don’t bring valuables – we didn’t have lockers.  The tour started out with us feeding the elephants pieces of watermelon.  There was a barrier between the elephants area and the building for tourists.  We were also required to remain behind a red line with about 5 feet between the barrier and the line.  We were permitted to cross that line only when it was our turn to feed the animal. Next, we went on a walk to look at a family of females with a baby male elephant.  They weren’t aware the mother was pregnant when they accepted her to the park, and when the male is old enough he will have to be in a large cement-fenced-off area as the males can become quite aggressive.  How sad that even in a sanctuary they have to leave the 3 male elephants in solitary confinement.  We watched them for a while then wandered over to two different elephants we were allowed to approach and pet.  Briefly.  These were short, scheduled photo opps.  I felt bad taking my turn because, as elephants do, each was just happy grazing away.  I felt like they didn’t really want to be disturbed by me. After that we had lunch.  The massive spread was entirely vegan and pretty delicious!   Once lunch (over an hour) was over we had some free time. They offer massages upstairs, but H and I had discussed getting a couples massage in Chiang Mai so I just kind of sat around and chilled with a couple of the many stray dogs they had running around.  They have a sanctuary for dogs as well, but only let the calm ones into the park area.

In the afternoon we set off on what was supposed to be a “long walk”.  I was so excited!  Finally I would be getting my Thailand workout after a sad Muay Thai class in Phuket.  Nope!  This long walk ended up just being to the river so we could watch the elephants play in the water together.  We had 3 or 4 groups watching, so it was mostly people watching the animals frolic through their camera-phone lens.  Some idiots tourists tried to get into the water with them and one Italian almost got trampled. After watching them bathe and cool off, we were taken to an area where we had 2 minutes to bathe the elephants.  Wahoo!  A whole 120 seconds of water fun.

The issue I took with the experience probably stems from the fact that I went alone.  I was in a gorgeous, lush, green, mountainous place in a country I had desired to visit my whole life.  There were couples and a family in my group and I felt like an outcast.  I was able to really observe the routine of the various tours that were operating, and it really seemed old hat.  Our mahout actually worked for the Chiang Mai government and dedicated his vacation days to the park.  He had plenty of interesting stories, but I felt like because there were so many visitors we were constantly standing around far away from the elephants and were rushed through any opportunities for interactions.  I don’t actually feel like I learned anything being at the park.  This was disappointing for various reasons.

The primary reason is because this was the activity for which I was most excited on my trip.  The second, is that H and his friends went to a different park and had a blast.  I believe the place they visited was Elephant Jungle Sanctuary .  There are only 2 sanctuaries in Chiang Mai where you are forbidden to ride the elephants and that’s the other one.  They had the experience of trekking through the the lush, green mountain land with the elephants.  They got to spend a lot more time up close and personal with the pachyderms.  Instead of just getting a 2-minute photo-opp bathing the elephants with a bucket, they were fully submerged playing in the water with ’em.  When I planned on visiting the Elephant Nature Park Chiang Mai, I fully expected to be hiking, bathing, and feeding the elephants.  I told my parents I’d be shoveling elephant poop for most of the day.  I was cool with it!  I was paying to volunteer my time there.  I was prepared for a workout!  Unfortunately I felt like I really was just standing around most of the day. I chose Elephant Nature Park Chiang Mai based on their ethical treatment of elephants and the rave reviews of other travel bloggers.  What I got was really just a day of standing around watching elephants from afar.  I had to put my glasses on to see them.  I normally reserve my glasses-wearing time for the ball-park if we have seats in the back row of the bleachers.  You could tell the elephants had really gotten used to the tourists being there.  To them, we were just another hand placing watermelon pieces within trunk-reach.  Maybe if there were more educational opportunities (talking, reading, not necessarily within view of the animals) I would have felt more rewarded.

There was an elephant with a pierced ear and flower ring at Elephant Nature Park Chiang Mai.  I think meeting her will haunt me for quite some time.  I don’t think she had found her place with the other elephants on site.  She veered away from her mahout while my group was leaving the “bathing” part of the afternoon.  She walked straight up to me like she wanted to talk. I think this elephant knew that I was alone and was kind of over it.  I don’t think she was quite jaded enough to think of me as just another food source.  Her mahout yelled at me to get out of her way, but when I moved to the side to let her through she just stopped and hung out beside me.  Later on she came by and just stood by me.  I wasn’t anywhere near the food – just waiting for our group to congregate and head back to the van.  They say “an elephant never forgets”.  I think these gentle giants know more than they let on.