Hallowe’en in Busan was one of the best times I’ve had in years!  I actually got to celebrate my favourite “non-holiday” 3 times in my new city.  The fun began back in September when the head Kindergarten teacher mentioned that we would be ordering our costumes soon.  We’d be wearing non-DIY costumes at our Hagwon Hallowe’en?  SCORE!  After having been called “Snow White” all throughout my time at Queen’s University, I got to live out my Disney Princess fantasy in a costume that was labeled “Sexy Snow White”, but actually wasn’t ridiculously short.  I had dyed my hair a dark brown since my roots were coming in and since winter is coming I figured – why not?  Some of my students were so amazed they thought it was a wig.  One of my students said: “Wow!  Teacher, your hair looks better!” and some others said it looked really beautiful which melted my heart a little since these kids tend to be a little too honest about fashion, weight, and other things about which we westerns might not be so forthcoming. 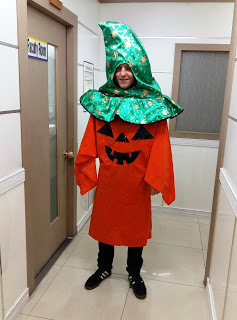 Rather than having our normal Kindy classes in the morning, we came into work for our afternoon classes then got to hang out after school and have a little party with our students.  There were 3 kindergarten Snow Whites, and we got a picture together but I’m not going to post it here because, you know, they’re kids and stuff.  The 3 classes performed some songs (with choreography!) and made speeches about their costumes.  It was adorable to see them get amped up, and all of their speeches were delivered perfectly (some to our surprise!).  It was also cool to meet their parents.  These kids have such big personalities (and wardrobes) and it’s cool to see who they’re more like – their mums or their dads.  From what I gather, the parents are far more active in their children’s lives in Busan than in Seoul.  It was really nice to be introduced to them by my students who were so proud that night.

The next day, I got to show one of my classes the movie “Hocus Pocus”.  I don’t think this movie is quite as classic in the UK as it is in North America (the other 2 foreign teachers here are from England), but my kids really enjoyed it and I got to have a nostalgic moment.  The rest of the classes involved taking pictures and playing Halloween games, trick or treating, and some gory facepaint care of one of the Korean teachers who grew up in California.  It was really neat to see everyone get so into the fun!

L, S, and I had planned on going out for Hallowe’en dresses as Cher, Dionne, and Tai from “Clueless”.  Having checked out Seomyeon’s vintage shops (a whooooole other post needs to be dedicated to these awesome places) as well as H&M, Zara, and a few other stores in the neighbourhood, we ended up deciding against this trio costume because it was just too hard to imitate the Dolce & Gabbana yellow plaid suit that would really stand out from the crowd and be indicative as to who we were imitating.  I had found a denim overall-style skirt that would have been perfect for the scene where the Mighty Mighty Bosstones (remember them?) were playing (and where Tai fell down the stairs).  Eventually, we decided the best route to go would be “Dreamgirls” as we had found matching gold-sequined crop-top/ high-waisted skirt outfits that would be just the ticket for our club crawl that, coincidentally, started at Eva’s Ticket.

For KRW 20,000 (about $25 Canadian) we got cover to 5 bars in the KSU area of Busan (Eva’s Ticket, DrunkenMaster, HQ KSU, Eva’s, and Almost Famous), and got a drink and a shot at each spot for booking early.  There was a costume contest and several raffles, none of which we won as we only picked up our drinks from 3 of the locations (Eva’s closed early and we didn’t end up going to Almost Famous). 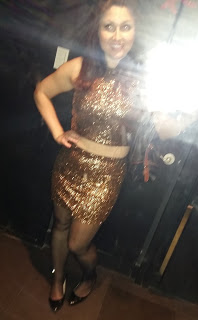 We did, however, get our groove on to “Hotline Bling” (because Drake), meet a bunch of Kakaotalk Friends (because Korea), and take a bunch of group shots (because when else are we all going to be wearing matching gold sequined get-ups?).

A colleague of mine had grabbed my Snow White costume as a gag.  We weren’t quite sure if he was going to wear it out for Hallowe’en, but when this image came up on Koreabridge I was proud to say he most certainly did have the nerve to wear it out.  I will not insult myself with a “Who Wore it Best?” side by side image, because of course he did:

There you have it!  Hallowe’en in Busan was wicked and I’m excited for any other opportunity to get dressed up in costume and go out on the town.
Cheers!
xoxo