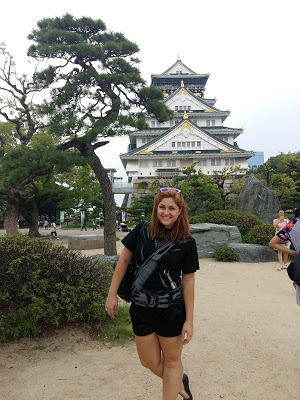 Osaka can, in fact, be done in a day.  Had I worn appropriate footwear I really would have checked everything off my list and have been off to Kyoto for Friday, but I opted for flats and that was not the brightest idea so my advice for you if you’re just here for the pictures is to wear runners and get Osaka and Kyoto done in 2-3 days on your mini-break. 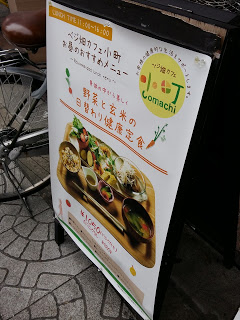 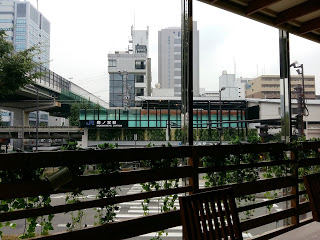 After our first late evening out we got up and out the door by about 10 AM and headed to Osaka Castle.  We stopped at this wonderful little restaurant called “Comachi” for some nosh before heading into the massive park where Osaka Castle is located.  It was about 37 degrees Celsius not counting the humidity, so we were really happy to have a little rest time in an air-conditioned environment.  We were also pretty thrilled to be eating our own meal (rather than the shared plates typical of Korea) with lots of veggies.  Stumbling upon a mostly vegetarian spot was great for our 2 vegetarian companions, as well.  My curry was awesome and I was pretty full all day. 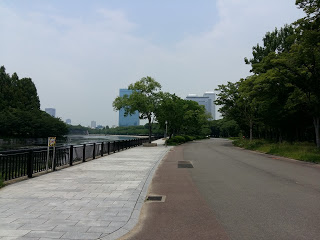 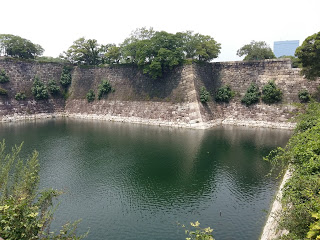 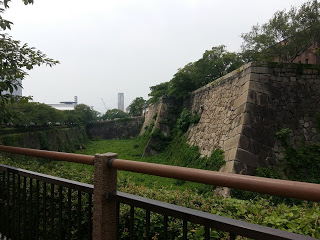 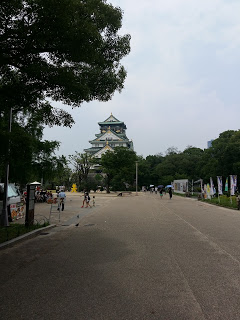 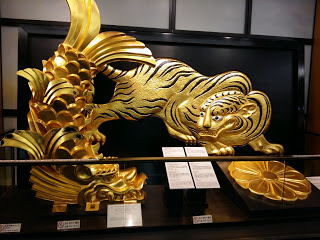 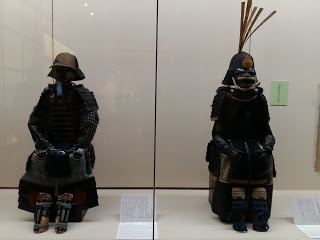 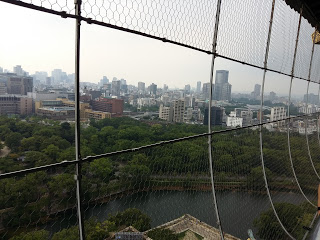 Two of us took the stairs up to the 8th floor while the others waited for the elevator.  It was hot and muggy and started to storm which was pretty cool from the top of the completely modernized Osaka Castle.  You can see the whole city and there are maps telling you exactly what you’re seeing.  We headed back down the stairs just in time for giant drops of rain to pile down on us.  Getting out of that park seemed to take an eternity and we were pretty much drowned rats by the time we got to the subway.  We were going to head back to the hostel, but instead chose to mosey on (smelling of wet dog, of course) to Shitennoji Temple.  We took the subway to Tennoji and then decided to grab a cab not knowing exactly where it was.  Everything is pricier in Japan, and cabs are no exception.  If you can take the subway then you should do it!

The grounds at Shitennoji (“Shitenno” for the 4 Buddhist Guardian Kings, and “ji” meaning Temple) are free to roam, but to see the inside of the Temple and the stunning Buddhas was about $3.  This is totally worth it.  The temple grounds themselves seemed fairly similar to those in Korea (where once you’ve seen one you’ve pretty much seen ’em all), but the statues of the Buddhas were entirely different.  Still gold, you can see a difference in the way the faces have been made, plus there are lots of apples and fruits, etc. from people coming to worship.

c/o Steve Vidler
There is no photography permitted, so here are some photos I found from Google Images.  They do not do them justice, so definitely go see them yourself!

Some of you may recognize these studs from my trip to Ssanggyesa Temple.  They’re not quite as ripped in Korea.

By now my clothes had dried a bit but my shoes were full of dirt and the soles were wearing thin.  The dogs were barking, but we were headed back to the subway (several blocks away – maybe 10? There’s an underground [AIR-CONDITIONED] path to the subway we ended up taking.  It was glorious) to find “The Face”.  I had no idea what the boys were talking about, but after a train ride back to Namba and a walk that seemed much farther than it actually was, we reached Namba Yasaka Shrine.

Originally 12 buildings, most of the shrine was actually burned down during air raids in 1945.  These building were built after the war, and the lion-head theatre is pretty striking!  Namba is confusing – we had to take exit 31 to get here so be sure to get a map!  We actually managed to get around using maps and cabs – none of us had data plans and there is no wifi anywhere in Osaka.

Two of our companions decided to go ahead and watch a Puppet Show so we wandered around (where else) the Dotonbori again.  They do a lazer and water show and there are tons of awesome stores, cafes, bars, and restaurants in the area.  It’s packed before the sun goes down but after?  It’s all pretty boarded up and quiet so make sure to get your okonomiyaki and takoyaki in before sunset.

We went back to J-Hoppers to rest for a bit before dinner.  I had no idea the plan was to go back to the Dotonbori, so I went pretty casual and had grabbed some edamame from 711.  Let’s discuss the convenience store game here.  At 711 there are rows upon rows of sushi, soba, sandwiches, and other dinner items that shouldn’t be scoffed at.  This is the only place you can really get a cheap meal and they’re not bad.  If you’re saving up for Kobe beef (yet another thing I didn’t manage to tick off my list) then perhaps 711 meals will be your saving grace the rest of the time!

This salad was half vegetables and half sweet potato crisps.  It was delicious.

Our second Izakaya experience was in the Shinsaibashi.  Go there for cute little restaurants at night and cool shops during the day.  The capsule hotel is there as well and looked really cool!

You can get just about anything your heart desires at the Tax Free shop.  They have all the wild varieties of Kit Kat bars, they have an entire wall dedicated to Hair Dye, they had tons of Hallowe’en costumes, sex toys, camping gear, and electronics, and we didn’t even hit every floor.  If you need souvenirs this might be the place for you.

The streets in the market area were everything I wanted Japan to be.  With larger than life Gyoza, Crab, Dragon, and Octopus sculptures on the little food stands and tons of brightly-coloured signs I was pretty content just walking around taking it all in.  That’s how you do Osaka in just one day…