On a dark and stormy night in Toronto, the first of it’s kind as a late summer bid us farewell, I attended the Jaymes White Beverly Street Séance.  This experience has been attended by media of all kinds in Toronto. The reviews have been spec- nay, spooktacular, to say the least. This séance experience is not for the faint of heart, but it’s a slow climb to terror.

We met at Sin and Redemption (a former funeral home across from the Art Gallery of Ontario). If you’re attending the séance I would recommend having dinner elsewhere. There are some fantastic restaurants along Baldwin, and they won’t cost you $14 for the worst martini I’ve ever had, nor serve you frozen vegetables (I hope). Our evening of horrors was off to a good start, if your version of “a good start” comes from Addams Family vernacular.

Our intimate group of 7 ventured into the night led by our guide, Taylor, to George Brown House. This Ontario Heritage Trust building is not often open to the public, so it was a treat to venture inside the home. The elegant house, originally called Lambton Lodge, was constructed from 1874 to 1876 in the Second Empire style. It is notorious for strange, perhaps other-wordly, behaviour.

There was no going back once we entered the home once owned by a father of confederation. We were given a quick introduction by Taylor as well as the opportunity to purchase protection kits ($10) and mis-fortune cookies (5 for $3).  The basement of the building reminded me of a church. It was a little bit musty while bizarrely sterile. We made our way upstairs to the foyer to meet Jaymes and start the séance. 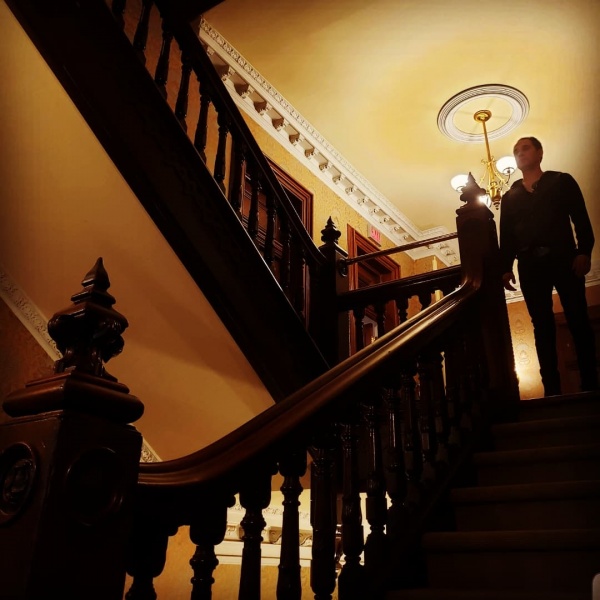 Jaymes maintains that each and every séance is different. Everyone is brought on a tour of the house paying great attention to areas where most paranormal activity has been reported. Bells will ring, home décor will topple over, and lights will flicker.  I dove headfirst into the drama and excitement of the séance. Some of the guests were so frightened they threatened to leave. Apparently about 15 % of participants actually have to!

Our group elevated one another’s experiences by almost daring  other guests to talk to the dearly departed.  Was it the ghosts of residents past or a team of handy helpers responding? I suppose I’ll never truly know. The murderer’s family is nowhere to be found having scoured the internet, but we made it out alive and had a thrill of a night at George Brown House séance.

MORE INFO AT JAYMESWHITE.COM – CLICK TO CHECK OUT VIDEOS OF THE BEVERLEY STREET SÉANCE AND RULE #6 OF A JAYMES WHITE SÉANCE