Late last Friday night a mish-mashed group of new and old friends and I boarded a tour bus and took the red-eye nearly 6 hours South of Seoul to spend a weekend in Jindo: the site of “The Miracle Sea Parting” and the accompanying festival.  The real miracle was that someone was able to wake me up for our 4 AM briefing and departure from the bus.  Once I was up and at ’em, however, I was happy as a clam.  We’ll get to those later!

This was my first formal tour group trip in Korea.  Sure, we had taken a trip to Gyeongju on a coach bus, but that was put on by some passionate Korean History Majors from a local University in Busan.  I had heard some horror stories about the various tour groups here and was kind of concerned that our trip would be “Spring Break Jindo Beach ’16”, but I felt pretty comfortable with my choice once we got on the bus.  I decided to go with WinK Travels (When in Korea) because not only would I be able to see the Jindo Sea Parting, I’d also be able to enjoy the festival, stay overnight, and head over to the Jinhae Cherry Blossom Festival the next day.  2 Korean bucket list items in one tour?  Yes, please!  Sadly, a few days before the event we were notified that due to the rain near Busan “wiping out the cherry blossoms” (ahem…not quite), we would be headed to Jeonju instead (home of the most famous Bibimbap).  I was pretty bummed about Jinhae, but getting to Jindo is a once in a lifetime (or…once a year if you’re really dedicated) event.  On we went!

The bus left the WinK Taphouse at 11:30 PM stopping only an hour later for a rest stop.  I suppose a few people had gotten into the soju a little harder than expected!  We continued on the road until around 4 AM when we were awoken with details of how our day would progress.  We’d be starting out nice and early walking from the parking lot along the water to the area where the sea parting would occur.  There would be tiki torches as well.  What had I gotten myself into?

The walk at that early hour in the pitch black morning seemed endless.  My travel buddies (one of whom had had strep twice over the past couple of weeks) were not exactly jumping for joy with their decision to join me on a whim.  I had a sugary convenience store coffee and was pretty hyper, which probably made them hate the situation a little more since I was pretty much Tigger bouncing down the street in my stylish yellow hip-waiters.

We were greeted by the far-away glow of lanterns, torches, and a statue of Grandmother Bbong and a tiger illuminated in bright, LED coloured lights.  The legend is that in the late 1400’s a man was exiled to Jeju Island.  Throughout the journey, there was a strong storm which led to the exiled man being washed up on the shores of Hoedong (“Tiger Island”).  Over the next 200 years many people were (allegedly) killed by the ferocious animals.  The villagers decided to move along to Modo Island, but Grandmother Bbong was sadly left behind.  She prayed and prayed to the Dragon King of the Sea.  He appeared to her in a dream telling her that a rainbow would appear to guide her to her family.  The next day she went down to the sea to pray to the Dragon King again, and lo and behold the waters parted.  Sadly, as she neared Modo Island, exhaustion set in.  She was reunited with her family one last time before she died in their arms.

Real Talk: The low tides are a result of tidal harmonics.  The gravitational pull of the moon and the sun coupled with the location of the Earth in its rotation create extreme low tides.  Still cool because, well, science. I’m not sure whose bright idea it was to immediately hand me a torch while I was hopped up on caffeine at that unearthly hour, and I immediately managed to singe off a significant portion of my newly-blonde hair. 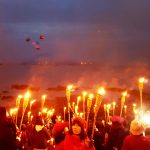 Just kidding.  I managed to keep the torch lit the whole way out at sea and back, and didn’t fall once! 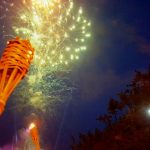 The festival began with an opening ceremonies of sorts.  There was dramatic music, and excited MC, fireworks, and a countdown to the parting of the sea.  We weren’t exactly on time (we were a tad early, in fact), but the hoopla was exciting nonetheless. 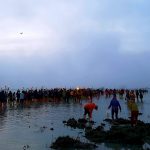 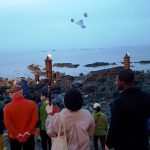 Getting out into the water wasn’t too bad, but the rocks were pretty sharp and slippery and the tread on my rented wellies was not the best match.  Star (87Pages) kept telling me to just walk through the mud, but I was already into the rocks (like a fool).  I had heard from people with Hunter Boots that they felt it was pretty slippery too, so I guess the best thing to do was squish your feet in the mud as much as possible, make sure you don’t climb onto any slippery rocks, and above all else – be careful! 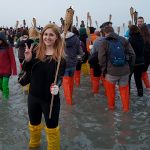 We made it about 3/4 of the way there before hearing rumours that if we actually reached the island we’d have to have a rescue boat sent to pick us up.  Seeing as we’d be napping before enjoying the festival, it just made sense to make our way back up to dry land and over to our hostel:

The walk back gave us some of the most stunning views I’ve seen in Korea thus far.  I’m so glad I decided to be an early bird and make my way out to Jindo! 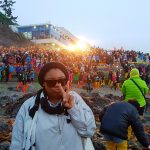 All my friendlies who had booked the trip made it, and we even made some pals from our new hood in Jamsil! What a gorgeous start to a Saturday, and what a stellar weekend away!