After a marvelous day perusing Pale de CZ in Haeundae for brunch (we’ll get there – Haeundae Smokehouse needs it’s own post), followed by the Andy Warhol Live Exhibit at the Busan Museum of Art, we were ready for an early night in, but weren’t quite ready to call it a day.  With the help of our handy-dandy Google Maps, we discovered that while Centum City is a subway stop away, on a mild night it’s actually quite a nice walk!

Shinsegae is all dolled up for Christmas.  Walking down the street to the mall it almost felt like we were back in downtown Toronto heading to check out the Christmas specials with windows all dolled up with sparkles and snowflakes…and…Star Wars? 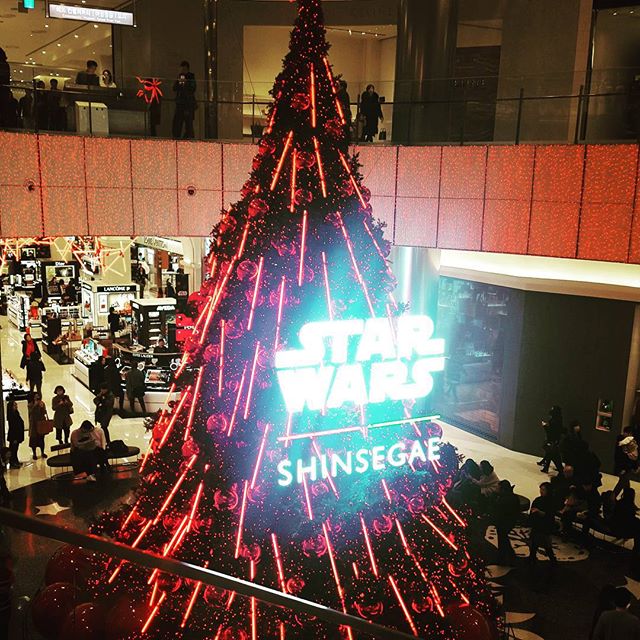 Image c/o @Mijungc on instagram
It seems the idea of the upcoming Star Wars movie is keeping all of Busan warm at night, mostly by light-saber and LED rather than tinsel on this year’s tree.

Through the hustle and bustle of holiday shoppers we meandered, not really in the hopes of finding anything, but really just to stay out and walk for a bit.

In the underground food court area there’s a massive wine shop called “Wine House”.  It’s incredibly overpriced (I found a bottle for KRW 12,000 that is regularly sold at LotteMart for KRW 5,000), but has a cute little wine bar attached called Bubbles.

My glass of cava was KRW 6,000 and S’ champagne lemonade was KRW 5,000.  We sipped while taking a little breather and talking about Christmas and New Years plans when the lovely bartender mentioned they were having a sale on bottles.  We figured it might be nice to have a little bubbly over the holidays so we picked up a bottle of cava each for KRW 20,000 (on sale from KRW 26,000).  I’ll keep my eyes peeled for PJ and Veuve, but in the moment we figured it was a deal!  Bubbles is a nice little treat and repose from the madness that is Christmas shopping.  Be sure to check it out next time you’re in Centum City!