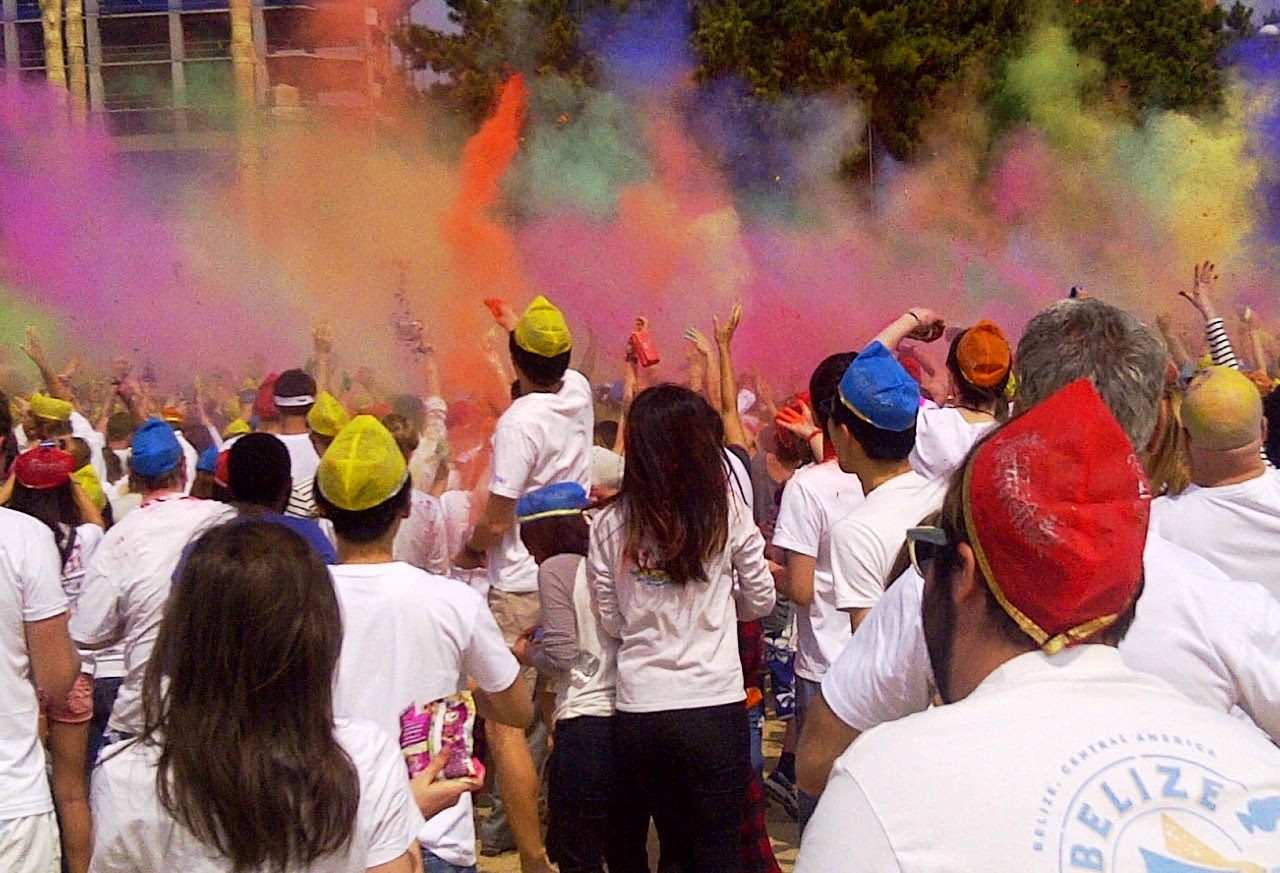 Last weekend we celebrated Sunday Funday at a Festival called “Holi” down at the famous Haeundae Beach in Busan, South Korea!
“Holi (pronunciation: /ˈhoʊliː/; Sanskrit: होली Holī) is a spring festival, also known as the festival of colours or the festival of love.[3][4] It is an ancient Hindu religious festival which has become popular with non-Hindus in many parts of South Asia, as well as people of other communities outside Asia.[5]
The festival has, in recent times, spread to parts of Europe and North America as a spring celebration of love, frolic, and colours.[6][7][8]
Holi celebrations start with a Holika bonfire on the night before Holi where people gather, sing and dance. The next morning is a free-for-all carnival of colours,[5] where participants play, chase and colour each other with dry powder and coloured water, with some carrying water guns and coloured water-filled balloons for their water fight. Anyone and everyone is fair game, friend or stranger, rich or poor, man or woman, children and elders. The frolic and fight with colours occurs in the open streets, open parks, outside temples and buildings. Groups carry drums and musical instruments, go from place to place, sing and dance. People visit family, friends and foes to throw colours on each other, laugh and chit-chat, then share Holi delicacies, food and drinks.
Holi is celebrated at the approach of vernal equinox,[5] on the Phalguna Purnima (Full Moon). The festival date varies every year, per the Hindu calendar, and typically comes in March, sometimes February in the Gregorian Calendar. The festival signifies the victory of good over evil, the arrival of spring, end of winter, and for many a festive day to meet others, play and laugh, forget and forgive, and repair ruptured relationships.[5][12][13]“ 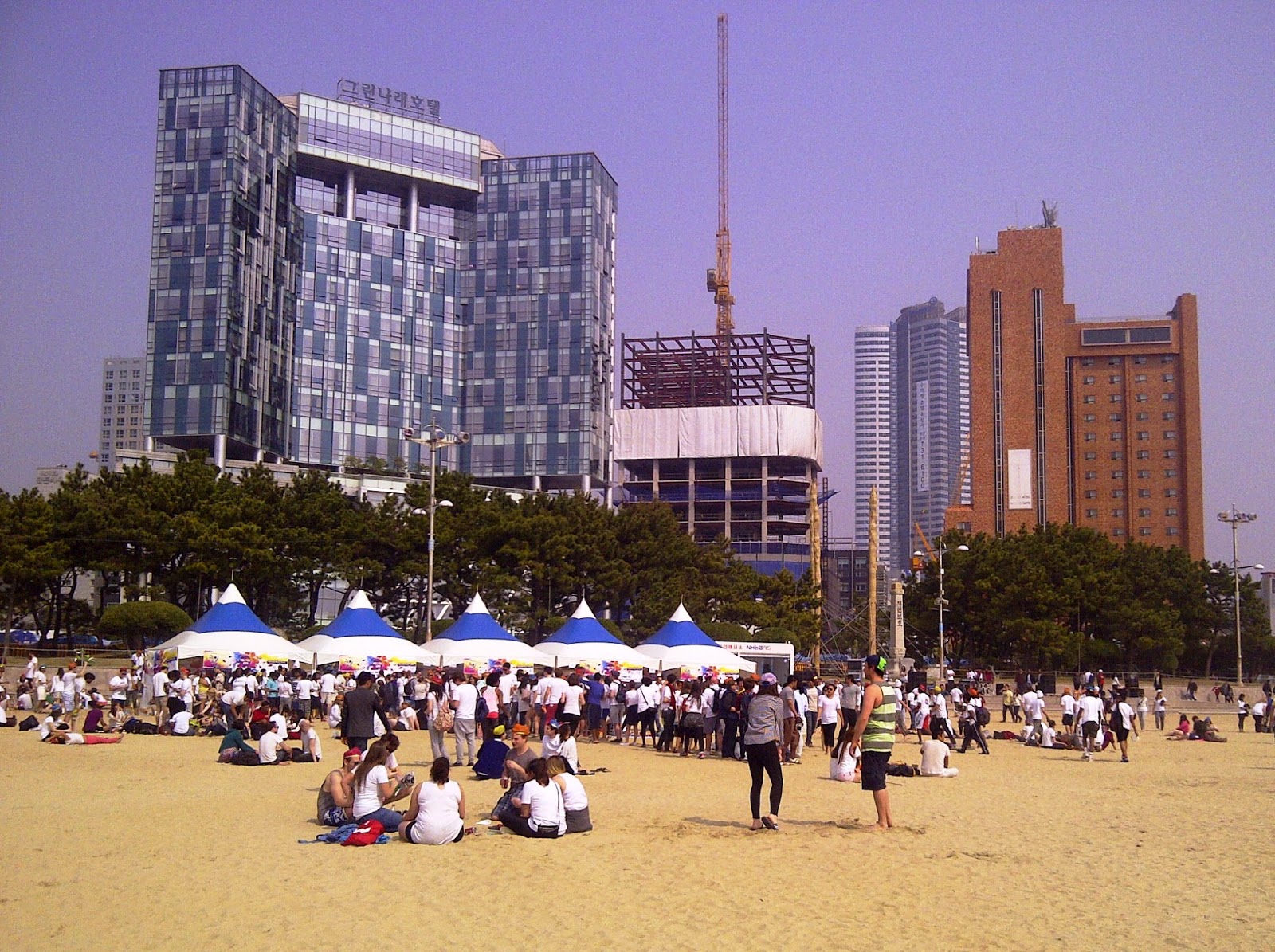 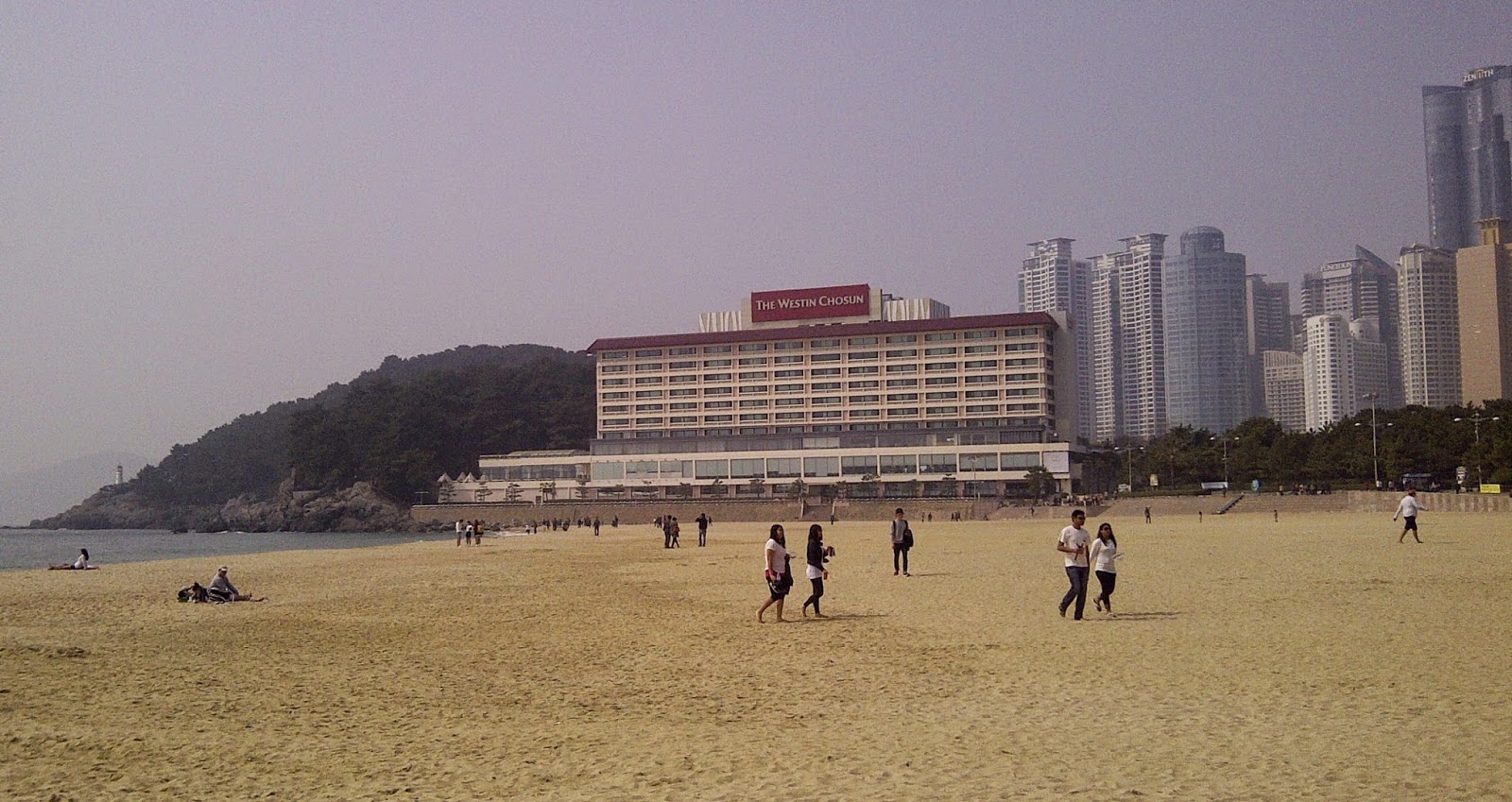 We arrived at Haeundae Beach around 10 AM and decided to go ahead and register formally for the festival.  For KRW 10,000 we received a Holi cap, a bag of coloured powder, a soda, and 2 delicious samosas!  I had been craving some Indian spices and this was a great (albeit unconventional) breakfast we enjoyed wearing shorts and a t-shirt while sitting on the beach.  Yes, ladies and gentlemen, I was enjoying beach time mid-March! 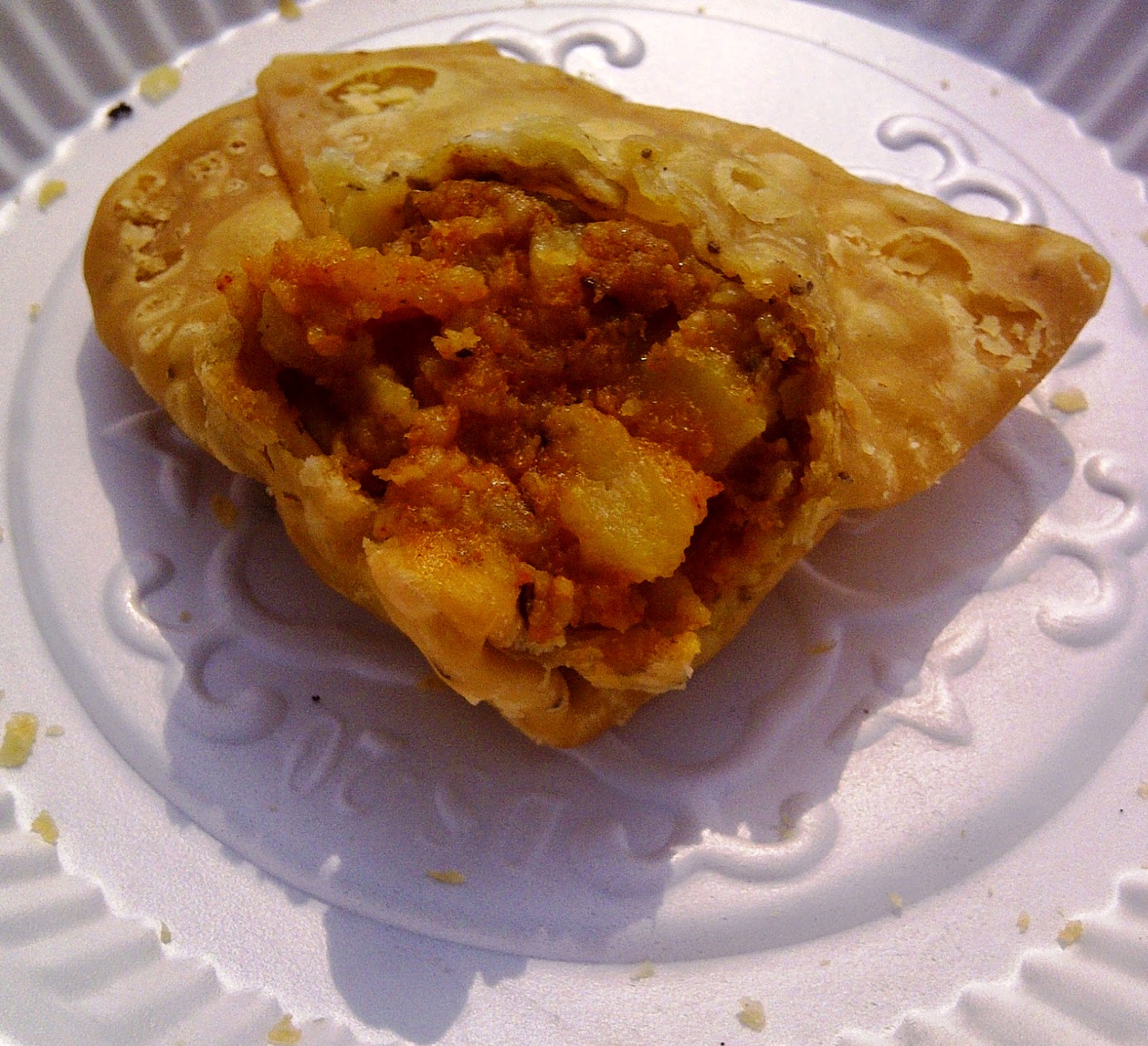 At noon the festivities truly began, and after some Makgeoli we headed over to the area where we would be throwing the powder.  There was a countdown then boom – colour everywhere! 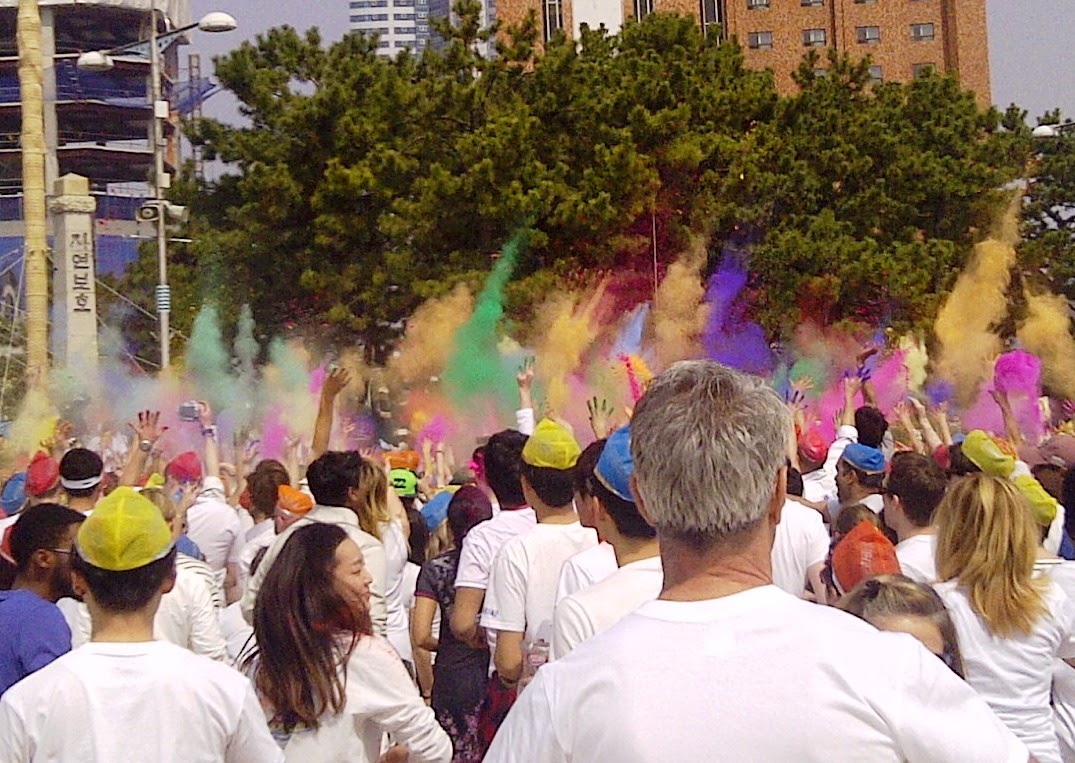 I was very glad to have my sunglasses on because the powder went everywhere: down my shirt, in my hair, in my mouth (I had green teeth for a bit…), and could have well gone in my eyes.  The vibe was like an outdoor club – EDM playing, people dancing, and everyone having fun.  I was nervous to head home on the subway after the event (I had coloured powder and sand all over my clothes), but I had strength in numbers as a friend of mine from Hwamyeong was heading into the subway at the same time as me so it was nice to have a friend on the ride home.