When I was 9 and Encyclopedia Britannica was still a thing, my Mom was living in California and my Dad was traveling a lot for work and the only thing I really could look forward to were our trips.  When we had visited Disneyland enough (in my Mom’s eyes – there will never be enough public singing, fireworks, and Cinderella’s Castle for me) Dad took me to Universal Studies after a quick peek at Grauman’s Chinese Theatre and that was that trip and it was lovely and jet to Toronto we go!

Back to Britannica – I often “olden-day Googled” California and places we might go.  Hearst Castle came up in my wormhole of research, and I wasted what was probably an entire printer cartridge putting together a folio of all things Hearst in the hopes we’d be able to go.  We didn’t end up there that trip, but a couple years later, since Mom was living in Redwood Shores working for a Software Company, we decided to roadtrip with a colleague of hers.  The trip was a blur of so many wonderful scenes, beautiful weather, and fantastic (well…kid) food.

San Francisco was amazing – long walks that felt like we were walking vertically (seriously – there are stairs rather than sidewalks), Ghirardelli Chocolate ice cream cones the size of my head, chowder in breadbowls (I don’t know quite how this was such a new concept to me), Golden Gate Bridge, the sun, the pier (and the sea lions), and Alcatraz were done in what felt like a day, and then we fell asleep to the jazzy lull of Law and Order (keep in mind this was 16 many years ago).

In the morning we grabbed a couple of muffins (I remember her hotel had a heated outdoor pool and phenomenal lemon poppyseed muffins) and set out early to make the trip down the coast to the castle.  Looking back to when I had first seen Hearst Castle online I suppose I thought that I would be able to swim in that pristine clear water, and upon arrival it dawned on me that it was more of a museum than a place for Kate to play, but even back then I was so overcome with the fact that I was standing in a place I had once dreamed about that it didn’t matter – I had arrived.

This is my Bucket List concept.  I want to make an ongoing list of places to see and things to experience throughout not just so that I know what I want and can keep tabs on the places I don’t want to miss out on, but also so that I can visualize my trips and ensure that they happen.  I anticipate that if I enjoy teaching English (I know I enjoy teaching music and dance, but English is a new beast) I’ll probably stick around for more than a year.  This feeling of “who knows?” (see masthead photo).  I plan on visiting various parts of South Korea beyond Gwacheon and Seoul (where I plan on snowboarding, horse betting, ziplining, and visiting Seoul Land) before venturing out of the country.  I’m here to immerse myself in the culture and want to be able to connect with my students.
So, without further adieu, I give you The South Korean Bucket List (a work in progress in no particular order):

Seokbulsa Temple
“Hard to find but a wonder to behold, Seokbulsa Temple is a hermitage carved into rock. Massive boulders stretching 40m in height jut out from the mountainside to form a U-shaped enclave with three rock facings that is now a place of worship. Inside the enclave enormous Buddhist images have been meticulously etched into stone. Visually powerful in scale and impact, it’s the kind of work that moves first-time visitors to exclaim ‘Wow’ as they step back and arch their necks to get the full picture. Busan appears to be the Miami to Seoul’s New York.  This beach town seems like an exciting spot and I’m lucky to have a friend living nearby (see: The Consulate).  A fast-paced city paired with the huge beachtown vibe I’m sure I’ll have a blast there and it’s definitely a must on my list!
Lonely Planet says: “Bursting with mountains, beaches, hot springs and seafood, South Korea’s second-largest city is a rollicking port town with tons to offer. From casual tent bars and chic designer cafes to fish markets teeming with every species imaginable, Busan has something for all tastes on land or sea. The mountains criss-crossing the city and the coastline define the urban landscape, while events like the Busan International Film Festival underline the city’s desire to be a global meeting place. The people can be brash but down-to-earth, caring little for the airs of Seoul, which seems like a distant cousin that’s just way too big and complex. Note that Busan is within the boundaries of Gyeongsangnam-do province but is a separate administrative unit with its own telephone area code.” 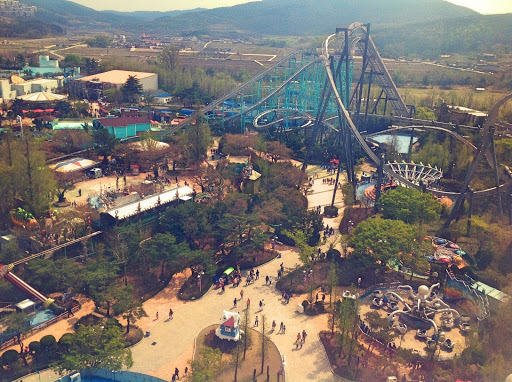 Gyeongju:
“Gyeongju, the ancient capital of Korea, is one of the most interesting cities to visit in the country. Chock full of temples and burial mounds, the city gives visitors a fantastic look into what life was like in ancient Korea. However, the highlights don’t just lie within in city’s downtown, but instead stretch into the surrounding countryside. From hidden grottos to hikes past ancient statues and monks training in the martial arts, Gyeongju has something for everyone.” Read More: http://tripologist.com/asia/5-must-see-korean-destinations-outside-of-seoul/
For those of you who don’t know, I’m also an amusement park enthusiast and will definitely want to check out Gyeongju Amusement Park as well (above)!
From The Korea Blog: There’s something about the symmetry of tea plantations that I find overwhelmingly peaceful, so I was delighted to discover that Korea has it’s very own estates, the most famous of which is located in Boseong, Jeollanam-do. At the Daehan Green Tea Plantation (보성녹차밭 대한다원), it’s possible to wander through the neatly trimmed fields of tea and dine on pork belly and ice cream that has been infused with green tea.” – The Green Tea Fields are high on my list of “must see” spots in Korea.  I’m leaving the hustle and bustle of Toronto for the equally busy (if not busier!) city of Seoul (well, a suburb called Gwacheon).  To find some tranquility and space to reflect I will definitely want to check these out.  The trip appears to be nearly 7 hours each way so from the maps it looks like it would make sense to go from Seoul to Gyeongju to Busan (and Seokbulsa) and then onto Boseong before returning to Seoul, but that might just be crazy talk.  I’ll find out more upon my arrival in Seoul.

“Jeju Island 제주도Jeju Island’s inclusion on this list is really a no brainer. Recently voted as one of the 7 New Wonders of Nature, Jeju is Korea’s prime honeymoon destination, houses it’s highest mountain, and counts a series of beautiful beaches as it’s own. It’s so popular a travel destination that the route between Seoul and Jeju is the world’s busiest!” …apparently there is a park dedicated to the celebration of penises there too.

Sun Cruise:
It appears that this is a cruise ship on land.  The bizarro concept kind of appeals to me and it sounds as though there are some private beaches associated with it.  I would love to go check it out!
http://english.esuncruise.com/about/greeting.html

The DMZ (Demilitarized Zone) and Paju:

Life Outside of Texas.com describes this little jaunt as: “A day trip to the DMZ is like nothing else in this world. The DMZ stretches for two kilometers on either side of the border between North and South Korea.  It is the most heavily armed border in the world and visits are only possible on a day tour from Seoul.  You can visit a military base, observation posts, infiltration tunnels built by the North Koreans and the joint security area smack bang on the border.  This is by far the highlight.  Tension is high as you actually enter a UN negotiation building straddling the border.  When I was there, there were North Korean soldiers staring at us through the windows.  It was an amazing experience in a very unsettling way and one of the top travel experiences I have had.  Definitely a must-see attraction!!”
I also discovered this great little video of fun-loving blonde Andrea Feczko poking fun at soldiers so…do with that what you will: https://www.youtube.com/watch?v=9R-qZvw26rA
Paju:
From “I’m a Wandering Soul” “Paju is typically known as the city that’s closest to North Korea, as it sits on the 38th Parallel. It’s also the city that you’ll be in if you visit the DMZ. But, there’s so much more to see in Paju than just the DMZ (though that is pretty cool, too). “

Jindo Sea Parting:
“According to legend, tigers were once abundant on Jindo Island. But when they began invading local villages, people fled to Modo Island. One woman, Bbyong, was inadvertently left behind.
She prayed to the god of the ocean, Yongwang, every day until finally the god told her in a dream that a rainbow would appear in the sea the next day for her family to cross the ocean.
When she went out to sea, the waters miraculously parted and a rainbow road appeared. Bbyong’s family crossed the sea to meet her, and thus began a popular tradition among locals and a mystical attraction among tourists.” – National Geographic

Yeouido Cherry Blossom Festival (Seoul in April)
I was such a fan of the cherry blossoms welcome spring and sun and fun in Vancouver.

I imagine that the cherry blossom festival in Seoul will be even more exciting.  There are some gorgeous photos here and I found a great little description here too:  “From April 13, the 2013 Yeouido Cherry Blossom Festival will be happening on Yeouido. Throughout the five-day festival, there will be a variety of events to enjoy the good weather by participating in Korea’s flower, food, and culture festivals.”

Last but certainly not least: The Arirang Mass Games Opening Ceremonies.  Yes, this event is in Pyongyang, North Korea.  That glimmering sign?  It’s little signs turned by children.  This is a spectacle I was not prepared to see after checking out a documentary from Vice, but doesn’t this make you want to go and not only see the show but pay respect to these methodical and precise performers?  Just me?  Okay.  Take a peek at some of the “best moments from” here: https://www.youtube.com/watch?v=UPThbdSFg8M&list=PLKCk4m–i-ZzTSno2idwPpTsIitbEQmdq

“The Arirang Mass Games which are held annually in North Korea are the most amazing series of choreographed dances with over 100,000 participants. I had researched the Mass Games so much before my first ever experience of seeing it live and absolutely nothing could prepare me for the emotional pull of the spectacle – just the sound in the May Day Stadium, Pyongyang beats through you. Opposite the audience sit 30,000 children – like human pixels they hold boards which make up a whole picture which changes rapidly through the event. It’s definitely my Korea must see!” – http://lifeoutsideoftexas.com/2013/08/29/korea-bucket-list-15-must-see-places-in-korea/

As I discover more exciting things about South Korea I’m certain I’ll add to this list, but for now I think I’ll have a lot on my plate over the next few months!  Suggestions?  Add them in the comments!